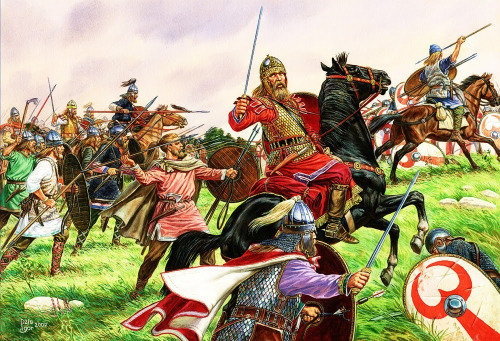 On August 9, 378 c.e., the Eastern Roman army under the command of Emperor Valens attacked a Gothic army (made up of Visigoths and Ostrogoths) that had camped near the town of Adrianople (also called Hadrianoplis) and was routed. The battle is often considered the beginning of the collapse of the Roman Empire in the fifth century.During the 370s c.e. there was a movement of peoples from Mongolia into eastern Europe. Called the Huns, they were driven from Mongolia by the Chinese. From 372 to 376 the Huns drove the Goths westward, first from the region of the Volga and Don Rivers and then the Dnieper River.This pushed the Goths into the Danube River area and into the Eastern Roman Empire. Seeking refuge from the Huns, Emperor Valens gave the Goths permission to settle in the empire as long as they agreed to serve in the Roman army.

The Romans agreed to provide the Goths with supplies. Greedy and corrupt Roman officials tried to use the situation to their advantage by either selling supplies to the Goths that should have been free or not giving them the supplies at all.During a conference between the Visigoth leadership and Roman authorities in 377, the Romans attacked the Visigoth leaders. Some of the leaders escaped and joined with the Ostrogoths and began raiding Roman settlements in Thrace.Throughout July and August of 378 the Romans gained the upper hand and rounded up the Gothic forces. The majority of the Goths were finally brought to bay near the town of Adrianople. The Western and Eastern emperors had agreed to work together to deal with the Goths.Western emperor Gratian with his army was on his way to join Valens when Valens decided to attack the Goths without Gratian and his army. Moving from Adrianople against the Gothic wagon camp on August 9, Valens’s attack began before his infantry had finished deploying.

As the Roman cavalry charged the camp, the Gothic cavalry, having been recalled from their raids on the surrounding countryside, returned and charged the Roman cavalry and routed it from the battlefield. The combined force of Gothic infantry and cavalry then turned on the Roman infantry and slaughtered it. The Goths killed two-thirds of the Roman army, including the emperor.It took the new emperor, Theodosius I, until 383 to gain the upper hand. Theodosius was able to drive many of the Goths back north of the Danube River, while others were allowed to settle in Roman territory as Roman citizens.In the short term this ended the problems with the Goths but set the stage for problems for the Western Roman Empire. With the peace the Eastern Roman Empire gained a source of soldiers for its army. These soldiers would eventually rebel and march against Rome.In 401 the Gothic leader Alaric led a Goth-Roman army on an invasion of Italy. The invasion was turned back in 402, and Alaric finally agreed to stop hostilities in 403. The peace only lasted until 409, when Alaric invaded Italy again and eventually captured and sacked Rome on August 24, 410 c.e.