Ancient city of Iasos rises out of the ashes 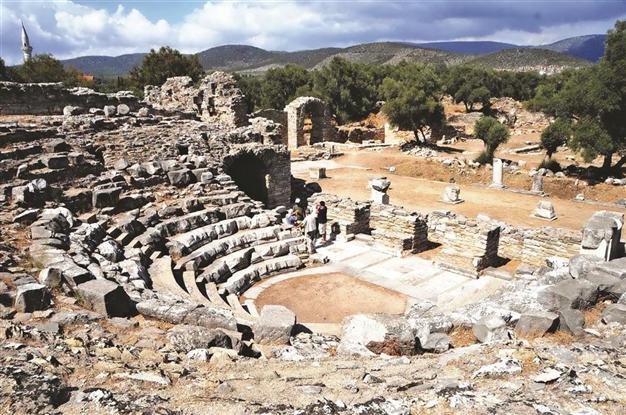 Archaeologists working on Iasos on Turkey’s Aegean coast have recently discovered that the ancient city was buried under a mountain of ash caused by the explosion of Mt. Thera on Santorini 3,600 years ago.Excavation works have also revealed a sewage system that was in place in the 4,000-year-old city and tunnels to the city’s theater. Excavations are being carried out by the world-famous Italian archaeology team of Studi Delle Tuscia University. The head of the excavations, Professor Marcello Spanu, is working with assistant archaeologists Emanuele Borgia and Şevki Bardakçı, Culture and Tourism Ministry official Selvet Karamahmut, 28 other Italian archaeologists, as well as university students who have recently unearthed new historic sites within the ancient city. Spanu said columns that were found one meter underground provided vital information about the history of the city. “Following the explosion of the volcano Thera, which also caused the destruction of the Minoan civilization on the islands of Crete and Santorini, the ancient city was covered with ash and remained so for a while. This is why its sewage system and tunnels to the ancient theater did not change. At the end of the excavation and restoration works, for which we spend nearly 100,000 Turkish Liras annually, I am sure that this place will be Turkey’s largest, as well as one of its most important, archeoparks,” Spanu said. Plans to attract more touristsBut Bardakçı, the deputy head of the excavations and an official from the Mediterranean Civilizations Research Institute, lamented the poor state of the promotion of Iasos, as well as the historic and cultural heritage of the surrounding Kıyıkışlacık village, while noting that they would undertake new endeavors to draw in more visitors.He said the excavation and restoration works had shed light on historic artifacts across a vast area and succeeded in providing key data about the region’s past. “As a result of works that will be carried out in the agora, the Artemis and Astias holy area, the Zeus Mefistos area, the mosaic house, the acropolis, the western port castle and the port, which was constructed between 1481 and 1522, the region will become one of the richest ancient cities in terms of cultural heritage. We have prepared the exact location and a digital map of the ancient city with satellite photos. When the project is done, we expect that tourists will rush to the area. As of next year, we will be in negotiations with travel agencies and tour operators to promote Iasos by way of daily boat tours and jeep safaris,” Bardakçı said.