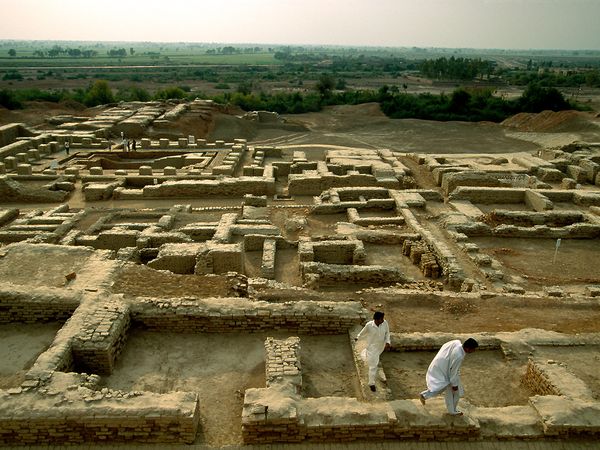 The Indus Valley civilization was entirely unknown until 1921, when excavations in what would become Pakistan revealed the cities of Harappa and Mohenjo Daro (shown here).

This mysterious culture emerged nearly 4,500 years ago and thrived for a thousand years, profiting from the highly fertile lands of the Indus River floodplain and trade with the civilizations of nearby Mesopotamia.

A well-planned street grid and an elaborate drainage system hint that the occupants of the ancient Indus civilization city of Mohenjo Daro were skilled urban planners with a reverence for the control of water. But just who occupied the ancient city in modern-day Pakistan during the third millennium B.C. remains a puzzle.

"It's pretty faceless," says Indus expert Gregory Possehl of the University of Pennsylvania in Philadelphia.

The city lacks ostentatious palaces, temples, or monuments. There's no obvious central seat of government or evidence of a king or queen. Modesty, order, and cleanliness were apparently preferred. Pottery and tools of copper and stone were standardized. Seals and weights suggest a system of tightly controlled trade.

The city's wealth and stature is evident in artifacts such as ivory, lapis, carnelian, and gold beads, as well as the baked-brick city structures themselves.

A watertight pool called the Great Bath, perched on top of a mound of dirt and held in place with walls of baked brick, is the closest structure Mohenjo Daro has to a temple. Possehl, a National Geographic grantee, says it suggests an ideology based on cleanliness

Wells were found throughout the city, and nearly every house contained a bathing area and drainage system.

Archaeologists first visited Mohenjo Daro in 1911. Several excavations occurred in the 1920s through 1931. Small probes took place in the 1930s, and subsequent digs occurred in 1950 and 1964.

The ancient city sits on elevated ground in the modern-day Larkana district of Sindh province in Pakistan.

During its heyday from about 2500 to 1900 B.C. the city was among the most important to the Indus civilization, Possehl says. It spread out over about 250 acres (100 hectares) on a series of mounds, and the Great Bath and an associated large building occupied the tallest mound.

According to University of Wisconsin, Madison, archaeologist Jonathan Mark Kenoyer, also a National Geographic grantee, the mounds grew organically over the centuries as people kept building platforms and walls for their houses.

"Gradually you have a high promontory on which people are living," he says.

With no evidence of kings or queens, Mohenjo Daro was likely governed as a city-state, perhaps by elected officials or elites from each of the mounds.

A miniature bronze statuette of a nude female, known as the dancing girl, was celebrated by archaeologists when it was discovered in 1926, Kenoyer notes.

Of greater interest to him, though, are a few stone sculptures of seated male figures, such as the intricately carved and colored Priest King, so called even though there is no evidence he was a priest or king.

The sculptures were all found broken, Kenoyer says. "Whoever came in at the very end of the Indus period clearly didn't like the people who were representing themselves or their elders," he says.

Kenoyer suggests that the Indus River changed course, which would have hampered the local agricultural economy and the city's importance as a center of trade.

But no evidence exists that flooding destroyed the city, and the city wasn't totally abandoned, Kenoyer says. And, Possehl says, a changing river course doesn't explain the collapse of the entire Indus civilization. Throughout the valley, the culture changed, he says.

"It reaches some kind of obvious archaeological fruition about 1900 B.C.," he said. "What drives that, nobody knows."