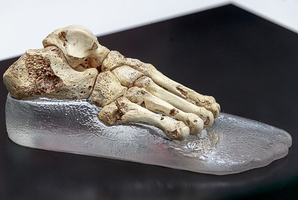 The oldest known stone javelins have been discovered in Africa, predating humans by 80,000 years.

Scientists say the 280,000-year-old spear tips discovered in Ethiopia were probably created by ancestors to ancient humans, rather than by our species.

The discovery Homo heidelbergensis, our ancestor, was much more technologically advanced than previously thought.

Homo sapiens then either developed the technology themselves, or learned it from Homo heidelbergensis, which helped them to move out of Africa and out-compete Neanderthals.

Writing in the journal PLoS ONE, they claim the weapons were made from obsidian - a naturally occurring volcanic glass known for its high blast resistance and strength.The Gademotta Formation in the Main Ethiopian Rift Valley was discovered in the 1970s and is best known for its Middle Stone Age archaeological sites.

'[This] is significant because it provides direct evidence for a highly advantageous, complex technology that pre-dates the emergence of Homo sapiens,' said the authors of the study.

Researchers believe the direct ancestor of Homo sapiens in Africa, and Neanderthals in Europe and Asia, is the Homo heidelbergensis, also known as Heidelberg Man.