This is the thirteenth in a series of posts exploring 3D modeling in Mediterranean and European archaeology. For more in this series click here. We hope these papers will start a discussion either in the comments of the blog or on Twitter using the #3DMedArch hashtag.

New technologies are making it possible to reinvestigate what ancient human life was like in earlier historical eras in ways that are more ethical, safe, cheap, and exact than ever before. One of the most groundbreaking technologies harnessed to analyze archaeological objects and landscapes is 3D modeling and, consequently, 3D printing. Over the last two years, as 3D modeling software, techniques, and printers have rapidly become cheaper and more user friendly, the adoption of 3D technologies in archaeological research has literally exploded with new projects appearing on a daily basis, as demonstrated by numerous contributions to this volume. Although archaeologists began printing objects created with 3D laser scanners a few years ago (Kuzminsky and Gardiner 2012; Niven et al. 2009), the speed of technological development focusing on modeling and printing in 3D presents another tool for the archaeologist’s expanding digital toolkit. Our purpose here is to present a preliminary study of the applicability of image based modeling, as opposed to laser scanning, for 3D printing in archaeology using three printing formats (ABS plastic, powder, and resin). The artifact we tested was an Acheulean handaxe (Figure 1A), the same artifact presented in Olson and Placchetti’s (2013) contribution. 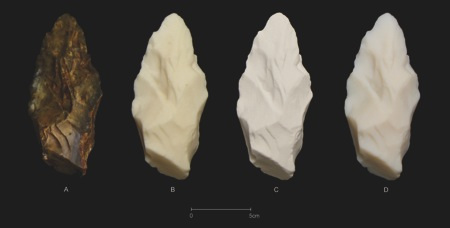 Efforts to illustrate accurately the form and appearance of chipped stone tools of flint, obsidian, and other siliceous rocks have been ongoing since the mid-nineteenth century when the first flaked stone artifacts were recognized as the artificial products of early human handicraft. Photography has only rarely been employed for illustrating stone tools because of the reflective surfaces of the rocks that were used to manufacture the tools, which make it difficult to light the specimens adequately to bring out the texture. There was also the problem of the depth of field, which made it difficult to focus both on the center and the retouched edges of the stone tool in the same photograph. Finally, the three dimensional form of the artifact was difficult to evaluate in the flat, two dimensional world of reflective analog photography.

These difficulties were overcome, at least partially, by the use of measured line drawings that included the outline of the stone tool, the pattern of the scars on the surface left by the removal of flakes in the reduction and retouch stages of artifact manufacture, and the use of shading lines in the flake scar outlines to suggest the volume of the artifact and the texture of its surface as they might have appeared if the artifact was lit obliquely from the upper left. These conventions for making two dimensional technical line drawings were established by French and English archaeologists in the 1860s, and have been used in publications ever since to enable readers to “see” artifacts like the Palaeolithic handaxes that convinced early archaeologists of the antiquity of humans in Europe. There was even a chromolithographic plate illustrating a handaxe in a publication from 1865 that attempted to show the color of such an artifact in a realistic manner.

As a consequence of the slow evolution of the methods of illustration and reproduction of stone tools, the demand for a more flexible method for reproducing the appearance of stone tools has long been desired. This need is now being met by the combination of digital photography and 3D printing. Here we discuss our own successful experiments to photograph original artifacts, in this case early Palaeolithic handaxes like those that were the subject of the first attempts at artifact illustration in the nineteenth century. We believe that this method, which uses commercially available software and hardware and does not require prolonged technical training or expensive scanners, can be readily and inexpensively deployed to the field, whether the museum, the laboratory, or the excavation site, allowing the rapid and accurate 3D imaging and reproduction of stone tools in a matter of hours. In our view this is the most significant advance in the illustration of stone tools to have been made in over the past 150 years.

The process began by taking 95 photographs at five different angles using a tripod and a rotatable surface, an effective photographic method that has been successively tested in the field (Olson et al. 2013). The object was photographed with an 18 MP Canon Rebel T4i with an 18–135 mm lens. The photos were then loaded into PhotoScan to first generate a tessellated 3D point cloud, then a monochromatic 3D model, and finally a fully photorealistic textured model. The textured model was then exported as an .obj file and brought into Meshlab for scaling and conversion to a .stl file for printing. With the assistance of Mechanical Engineering and the 3D Printing Lab at Wentworth Institute of Technology in Boston, we printed the handaxe using three types of 3D printers (ABS plastic [Figure 1B], powder [Figure 1C], and resin [Figure 1D]).

In the end, it took approximately 4 hours to fully model the Acheulean handaxe with an image based modeling technique and depending on the desired printing media, up to 7 hours for each print. From a costs perspective, the modeling of the objects required a digital SLR camera, a tripod, and a professional license of PhotoScan ($549 with the educational discount). Printing costs varied by printer type, but costs incurred for materials were as follows: ABS plastic ($58.55) (Figure 2), powder ($36.06), and resin ($120.77). It must be noted, however, that the pricing provided is based on Wentworth’s 3D Printing Lab guidelines, which only include material replacement costs and not auxiliary fees that one might encounter in a commercial setting.

After critically evaluating each model, it was clear that certain 3D printing formats were more conducive to retaining minute lithic characteristics than others. The powder model, unless immersed in a durable coating, is simply too fragile for continued handling. Although the model retains faint horizontal lines, which are byproducts of printing, the ABS plastic model retained the physical characteristics that a lithicist would expect to see in a reproduction. Baker (2013) and Forte (2013) briefly note the benefits of ABS plastic printing in this volume. It is the resin model that is the spitting image of the original handaxe in both its fidelity in retaining lithic features and its physical weight and feel.

This entire process has allowed us to think of all the ways that the combination of inexpensive image based modeling and printing could revolutionize existing modes of archaeological analysis, dissemination, and education. This process now makes it possible for an archaeologist with little training to obtain a digital camera, shoot a host of photos of an object, process the images in a user-friendly and inexpensive photogrammetry program, and then print a 3D model (printing costs varying between $35 and $125 depending on the material type and artifact size), all within a day’s work. It is completely revolutionary as it literally brings the technology of the Stone Age back to life and solves a 150-year old problem of lithic display.