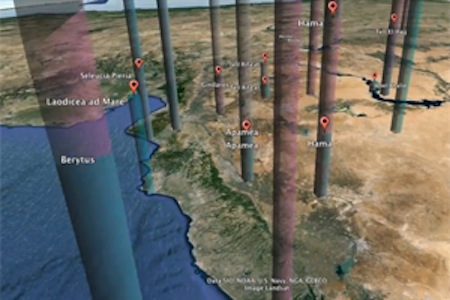 Google Earth may be a fun way to bring the far reaches of the present-day globe to people's fingertips, but archaeologists are now using the high-tech software to recreate maps of ancient civilizations. The endeavor is opening a window for researchers to the political and geographical changes that have shaped history.

Kristina Neumann, a doctoral candidate in the department of classics at the University of Cincinnati in Ohio, used Google Earth to track trade around the ancient city of Antioch, located in present-day southeastern Turkey, near the Syrian border, at the beginning of its takeover by the Roman Empire in 64 B.C. Neumann found the use of Antioch's civic coins was more widespread than was previously thought, suggesting the city had developed broad political authority within the region before being absorbed into the Roman Empire.

Neumann used the movement of ancient coins to track political relationships between cities, since authorities typically decided which foreign currencies were accepted in commerce. As such, if coins from Antioch were prevalent in a neighboring city, the two governments likely shared a political agreement, Neumann explained.

"I trace the process of change by working with historical proxies — in this case, coins," she said in a statement. "I created my own database from previously published excavation reports and lists of coin hoards, and imported it to Google Earth. My criteria are so detailed that I can see all the coins for a particular emperor or of a particular material."

Neumann tracked where different coins were found, and collected information on when they were minted and under whose authority. Using Google Earth, she was able to plot the flow of coins across different historical periods, creating a visual representation of Antioch's political reach.

"I'm very interested in the idea of an empire — physical empires, but also empires similar to what America has with its cultural and informational empires, and the idea of globalization," Neumann said. "My bigger question is, 'How do you get one empire which absorbs a lot of different people and yet lasts so long? How is stability achieved even with vast diversity?' I think that can speak to today's society with the culture changes we're seeing."

Antioch's civic coins were particularly abundant along a known trade route but were also used more widely among neighboring cities than was previously thought, Neumann found. Her maps effectively followed the contraction of Antioch's political authority as the ancient city was eventually integrated into the Roman Empire.

Neumann hopes this work will encourage historians and archaeologists to think of new ways to use technology for research.

"I'm trying to help historians think outside the box," she said. "There's a huge movement in the digital humanities in general, and this research speaks to that. Using tools such as Google Earth to visualize the ancient world could also have ramifications for how we look at data today."

Neumann presented her findings at the annual meeting of the Archaeological Institute of America, held Jan. 2-5 in Chicago.