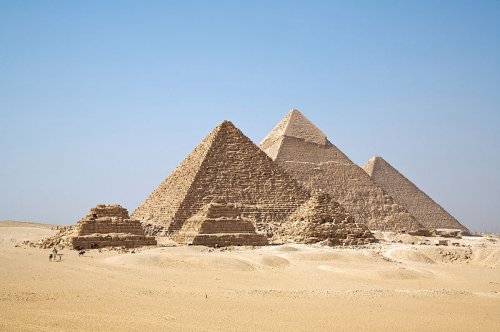 Welsh engineer Peter James has unveiled a new theory that the ancient Egyptian pyramids were built from rubble.

Archaeologists are fighting claims that their explanations on how the pyramids were built are incorrect.

Far from being constructed of giant stone blocks, 90% are rubble, according to a Times report.

Peter James, dubbed Indiana James, who has spent the last two decades studying the Egyptian pyramids, said: "Under the current theories, to lay the two million stone blocks required the Egyptians would had to have laid a large block once every three minutes on long ramps.

"If that happened, there would still be signs that the ramps had been there, and there aren't any.

Structural engineer James and his team at Cintec International in Newport, South Wales, are world leaders in restoring ancient sites.

He has assisted in reinforcing burial chambers in the 4,600-year-old Step Pyramid and the Red Pyramid.

Inside the Step pyramid in Egypt, they discovered that a massive tonnage of small stones was being held up only by the trunk of a palm tree thousands of years old.

James also has theories about what happened to the cladding of the pyramids. Archaeologists are convinced that the smooth stone was stolen for other building projects.

The engineer believes the outer stones fell off because of thermal expansion due to the great differences in temperature between day and night, ranging from 50C to 3C.

James, who doesn't pull his punches, said: "The pyramids were built to honour the sun god Ra, but in the end he was the one who buggered them."