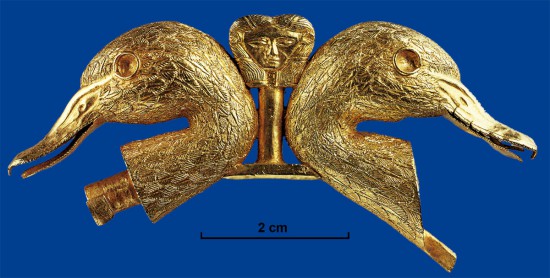 Goldwork appeared at the beginning of the 3rd millennium B. C. in Syria. The production of personal gold jewellery, like beads, pendants and earrings, started to increase around the second half of the 3rd millennium B. C. in different cities of Syria, and in particular along the Euphrates river in Mari and Tell Banat. In the later site, which is located at the north of the Euphrates valley, more than 1000 pieces of gold beads and pendants have been discovered. It reveals a great picture of the evolution of gold jewellery technology: development of hammering manufacturing processes, lost-wax casting – even though still rare –, incision methods for linear ornamentation, and the apparition of filigree, granulation and soldering for applied decoration.

This period of innovation in jewellery and precious metals craftsmanship had expanded all over Syria in Palace G of Ebla (BA IVA) on the Levantine coast, in the elite tombs at Umm el-Marra (BA IV) in the Jabbul Plain, at Tell Brak (Akkadian period) in the Djezireh, and during the Shakkanaku period in Mari. Gold technology reached an exceptional level of development thanks to the impulsion of Amorites at the beginning of the 2nd millennium B. C. Craftsmen of Ebla, as well as those of Byblos, always used techniques of decoration such as filigree and granulation for jewellery and weaponry ornamentation, thus exhibiting specific social and symbolic meanings. Such an evolution of gold decoration techniques is based on the generalization of soldering processes by controlling alloy fabrication and high temperature heat. Copper salt soldering is particularly adapted to filigree and granulation, while brazing seems more frequent for structural function, even though it was also used for decoration. In addition, association of different metals – copper/bronze, silver, and gold – and semi-precious stones – namely carnelian and lapis- lazuli – emerged at Middle Bronze and was regularly employed on the Levantine coast.

Technical polyvalence is also clearly recognizable in the Syrian jewellery of the Late Bronze, either at the craft workers’ skills level or at the workshop organization one’s. For instance, many beads from Qatna are composed of a stone core mounted with gold caps decorated by granulated patterns, and a rosette is entirely made of carnelian inlaying in gold settings with the cloisonné technique. Metal inlays on metallic or ivory items were also used at Ugarit. But they were linked to other ornamental items than personal bodily jewellery – decorated with filigree and granulation  –, like in the Aegean at the Mycenaean period for weapons decoration.

To sum up, Syrian technological innovation in jewellery is characterized by early multiplicity of competences in fabrication and decoration methods, control of soldering processes, good knowledge of mixed materials, polyvalence of skills and know-how in different craft activities.