Rivers as Weapons in Ancient War 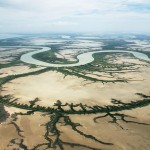 Semiramis, queen of Assyria (seventh century BCE), boasted in an inscription that she had extended her borders with courage and cunning: “I compelled rivers to run where I wanted, and I wanted them to run where it was advantageous.” Diverting rivers is an age-old environmental tactic in the history of war. According toStratagemsby Frontinus, a Roman commander and Manager of Aqueducts in Rome, Semiramis had conquered Babylon with a brilliant water trick. The Euphrates River flowed through Babylon, dividing the city in two. Semiramis ordered her engineers to divert the river,  allowing her army to march in the dry river bed right into the heart of the city. The very same feat was attributed to the mythical sorceress Medea and to two historical conquerors of Babylon, the Persian king Cyrus and Alexander the Great.

A stream was diverted to literally flush out an enemy by the Roman commander Lucius Metellus, fighting in Spain in 143 BC. The Spanish army camped in an easily flooded plain alongside a stream. The Roman legionaries damned the stream and waited in ambush to slaughter the panicked Spaniards as they ran for high ground.

In 78-74 BC, Rome was embroiled in a difficult campaign in Isaura,  a rugged region of eastern Turkey. The Isaurians were fiercely independent mountaineers labeled as “brigands and bandits” by the Romans. Publius Servilius finally defeated the fortified towns of Isauria by diverting the mountain streams where the Isaurians drew their water, “forcing them to surrender in consequence of thirst.”

Julius Caesar, in Gaul in 51 BC, used the same trick against the city of Cadurci. Because the town was surrounded by a river and many springs, his river-diversion plan required his troops to dig extensive networks of underground channels. Then Caesar stationed his archers to cut down the parched Gauls as they attempted to reach the river. The stratagem was successful: Cadurci surrendered.

Polyaenus, a Macedonian lawyer, wrote a military treatise for the Roman emperors Lucius Verus and Marcus Aurelius in AD 161. In it he claimed that the mythic hero Hercules had changed the course of a Greek river to destroy the Minyans because he was afraid to face such skilled cavalrymen in open battle. This story was intended to give the co-emperors a way to justify resorting to devious ruses instead of facing risky face-to-face battles, as they were preparing to enter a daunting war against the invincible Parthians of Central Asia. The Parthians, feared for their heavily armored cavalry and formidable horse archers, had just invaded the Eastern Empire—and, in fact, they were never defeated by the Romans.

Cunning tricks like diverting rivers to gain access to a city or to cause floods are examples of creative unconventional warfare. Unless such ploys killed entire populations by drowning (as occurred in some Islamic attacks by flooding towns in the early Middle Ages), diverting rivers aroused few moral qualms, because a well-prepared city or army should be able to anticipate or counter such tactics. But secretly poisoning water or food was another matter and raised ethical questions in most ancient societies.

About the author:Adrienne Mayor is a Research Scholar in Classics and History of Science, Stanford University. She is the author of “Greek Fire, Poison Arrows, & Scorpion Bombs: Biological and Chemical Warfare in the Ancient World” (2009); and “The Poison King: The Life and Legend of Mithradates, Rome’s Deadliest Enemy,” a nonfiction finalist for the 2009 National Book Award.