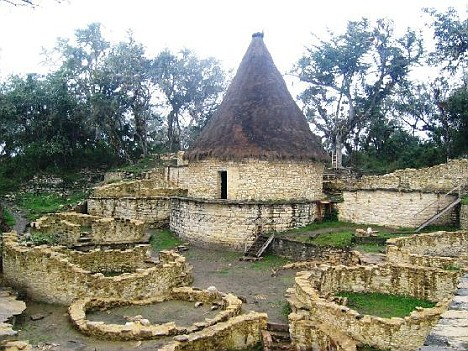 Shoulder to shoulder and nearly naked, gnome-like statues have stood for centuries at Los Pinchudos, a stone-and-plaster complex of nine tombs built into a high rock cleft in one of Peru’s northern cloud forests. The two-foot-tall (half-meter-tall) mahogany carvings bore silent witness as waves of looters hiked up to ransack the burial chambers. Vandals even hacked down one of the six unusual statues, whose robust male anatomy inspired the name Los Pinchudos (slang for “the big penises”). By the time locals led researchers to the site in 1980, the tombs were nearly empty. Yet the initial absence of mummies didn’t deter archaeologist Warren Church, who’s worked for 19 years to save Los Pinchudos and learn its secrets.

Little is known about the hill tribes that in the tenth century began carving settlements out of the dense cloud forests in the mountains between the Marañón and Huallaga Rivers. Inca contemporaries called them Chachapoya, the Cloud People. Although they left no written language, they did leave scores of stone ruins in this vertical wilderness of orchids, butterflies, and jaguars, where thick brush and mists camouflage sheer drop-offs. “You can literally find your legs dangling over empty space, your armpits supported by tree branches,” says Church.  For more than 500 years the Chachapoya cut farm terraces and villages into these steep slopes, raised llamas and guinea pigs—and fought each other. Around 1470 the Inca conquered the region. When Spaniards arrived in 1535, the surviving Chachapoya joined them to rout the Inca, impressing the Europeans with their battle prowess.  By 1700 smallpox and other diseases had killed most of the Chachapoya.

Los Pinchudos is a vital link to this lost people. Researchers don’t know who was buried here but think the tombs relate to Chachapoya ruins nearby at Gran Pajatén.   Even in its looted state the site has yielded tantalizing artifacts such as shell jewelry, which suggests contact with coastal people.   Most surprising are the statues. Wood artifacts rarely survive the humidity. Scientists attribute the figures’ preservation to the site’s location in an arid climate. The tombs might have been lost without Church and Peruvian conservator Ricardo Morales Gamarra, who restored the eroding foundations.  Church believes Los Pinchudos and its surroundings will teach volumes about this extinct culture: “My mind races, thinking of what the forests still hold.” Now a team of archaeologists, working on a tip-off from a local farmer, have uncovered a burial site in a 820ft-deep cave. The researchers have so far found five mummies, two of which are intact, as well as ceramics, textiles and wall paintings.

“This is a discovery of transcendental importance. We have found these five mummies but there could be many more,” Mr Corbera said. “We think this is the first time any kind of underground burial site this size has been found belonging to Chachapoyas or other cultures in the region.”

“The remote site for this cemetery tells us that the Chachapoyas had enormous respect for their ancestors because they hid them away for protection,” Mr Corbera said.   Locals call the cave Iyacyecuj, or Enchanted Water in Quechua, because of its spiritual importance and its underground rivers. The tribe had white skin and blonde hair – features which intrigue historians, as there is no known European ancestry in the region, where most (other) inhabitants are darker skinned.   The tribe’s own name is unknown. The word Chachapoyas is thought to come from the Quechua for “cloud people”, and is the name by which they were known to the Incas, because of the cloud forests they inhabited in what is now northern Peru.

A white-skinned people who were famed as ferocious fighters, the Chachapoyas held out against the Incans, who ruled an empire stretching from southern Chile to northern Ecuador until their conquest by the Spanish.

Archaeologists found an underground burial vault inside a cave with five mummies, two intact with skin and hair. ‘The women and their husbands always dressed in woollen clothes and in their heads they wear their llautos [a woollen turban], which are a sign they wear to be known everywhere.’   Chachapoyas chronicler Pedro Cieza de Leon wrote of the tribe: ‘They are the whitest and most handsome of all the people that I have seen, and their wives were so beautiful that because of their gentleness, many of them deserved to be the Incas’ wives and to also be taken to the Sun Temple.
المصدر : هنا