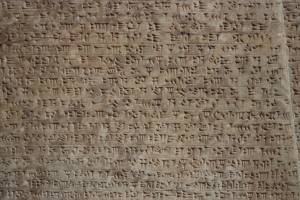 The Akkadian/Sumerian poet Enheduanna (2285-2250 BCE) is the world’s first author known by name and was the daughter of Sargon of Akkad (Sargon the Great). Whether Enheduanna was, in fact, a blood relative of Sargon’s or the title was figurative is not known. It is clear, however, that Sargon placed enormous trust in Enheduanna in elevating her to the position of high priestess of the most important temple in Sumer and leaving to her the responsibility for melding the Sumerian gods with the Akkadian ones to create the stability his empire needed to thrive. Further, she is credited with creating the paradigms of poetry, psalms, and prayers used throughout the ancient world. The historian Paul Kriwaczek writes, "Her compositions, though only rediscovered in modern times, remained models of petitionary prayer for even longer. Through the Babylonians, they influenced and inspired the prayers and psalms of the Hebrew Bible and the Homeric hymns of Greece. Through them, faint echoes of Enheduanna, the first named literary author in history, can even be heard in the hymnody of the early Christian church" (121). Her influence during her lifetime was as impressive as the legacy she bequeated to literature.

Enheduanna’s name translates as 'High Priestess of An’ (the sky god) or 'En-Priestess, wife of the god Nannar'. She came from the northern city of Akkad and, as Kriwaczek notes, "would have had a Semitic birth name [but] on moving to Ur, the very heartland of Sumerian culture, she took a Sumerian official title: Enheduanna - `En' (Chief Priest or Priestess); `hedu' (ornament); `Ana' (of heaven)" (120). She organized and presided over the city's temple complex, the heart of the city, and held her own against an attempted coup by a Sumerian rebel named Lugal-Ane who forced her into exile. The Akkadian Empire, for all the wealth and stability it brought to the region, was constantly plagued by uprisings in the various regions under its control. One of Enheduanna's responsibilities in the region of Sumer would have been to keep the populace in check through the ministrations of religion.

HER HYMNS RE-DEFINED THE GODS FOR THE PEOPLE OF THE AKKADIAN EMPIRE UNDER SARGON’S RULE AND HELPED PROVIDE THE UNDERLYING RELIGIOUS HOMOGENIETY SOUGHT BY THE KING.

In the case of Lugal-Ane, however, she seems to have been bested, at least initially. In her writings, she tells the story of being driven from her post as high priestess and cast into exile. She writes a plea for help to the goddess Inannarequesting her to petition the god An for help: "Funeral offerings were brought, as if I had never lived there./ I approached the light, but the light scorched me./ I approached the shade, but I was covered with a storm./ My honeyed mouth became scummed. Tell An about Lugal-Ane and my fate!/ May An undo it for me!/ As soon as you tell An about it, An will release me." Inanna apparently heard her prayer and, through the gods intercession in her cause, she reports, Enheduanna was finally restored to her rightful place in the temple. She seems to have been the first woman to hold this position in Ur and her comportment as high priestess would have served as an exemplary model for those who followed her.

She is best known for her works Inninsagurra, Ninmesarra, and Inninmehusa, which translate as 'The Great-Hearted Mistress’, The Exaltation of Inanna’, and 'Goddess of the Fearsome Powers’, all three powerful hymns to the goddess Inanna (later identified with Ishtar and, still later, Aphrodite). These hymns re-defined the gods for the people of the Akkadian Empire under Sargon’s rule and helped provide the underlying religious homogeniety sought by the king. For over forty years Enheduanna held the office of high priestess, even surviving the attempted coup against her authority by Lugal-Ane.

In addition to her hymns, Enheduanna is remembered for the forty-two poems she wrote reflecting personal frustrations and hopes, religious devotion, her response to war, and feelings about the world she lived in. Her writing is very personal and direct and, as the historian Bertman notes, "The hymns provide us with the names of the major divinities the Mesopotamians worshipped and tell us where their chief temples were located [but] it is the prayers that teach us about humanity, for in prayers we encounter the hopes and fears of everyday mortal life" (172). Enheduanna's prayers very clearly express those hopes and fears and do so in a very distinct voice. Paul Kriwaczek paints a picture of the living poet thusly: "Sitting in her chamber, or perhaps her office, for the director of an enterprise as large and prestigious as the Nanna temple of Ur must surely have been afforded the very best working arrangements, her hair beautifully coiffed by Ilum Palilis [her hairdresser] and staff, dictating to her scribe, perhaps the very Sagadu whose seal Wooley found, Enheduanna proceeded to make her permanent mark on history by composing, in her own name, a series of more than forty extraordinary liturgical works, which were copied and recopied for nearly 2,000 years" (121).

In 1927, the British archaeologist Sir Leonard Wooley found the now-famous Enhuduanna calcite disc in his excavations at the Sumerian site of Ur. The three inscriptions on the disc identify the four figures depicted: Enheduanna, her Estate Manager Adda, her hair dresser Ilum Palilis, and her scribe Sagadu. The royal inscription on the disc, reads: "Enheduanna, zirru-priestess, wife of the god Nanna, daughter of Sargon, king of the world, in the temple of the goddess Innana.” The figure of Enheduanna is placed prominently on the disc emphasizing her importance in relation to the others and, further, her position of great power and influence on the culture of her time.

Wooley also uncovered the temple complex where the priestesses were buried in a special cemetery. Kriwaczek writes, "Records suggest that offerings continued to be made to these dead priestesses. That one of the most striking artefacts, physical proof of Enheduanna's existence, was found in a layer dateable to many centuries after her lifetime, makes it likely that she in particular was remembered and honoured long after the fall of the dynasty that had appointed her to the management of the temple"(120). Further proof of her profound impact on culture is that she is still remembered and honoured in the present day and poems are still composed on the model she created over 4,000 years ago.