BACK TO THE FUTURE: TERRA PRETA – ANCIENT CARBON FARMING SYSTEM FOR EARTH HEALING IN THE 21ST CENTURY 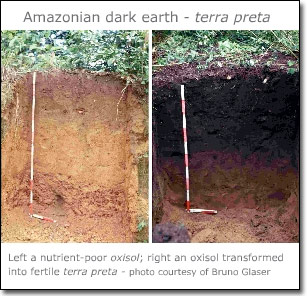 Terra Preta, meaning "Black Earth" in Portuguese, is a soil building technique developed by ancient Amazonian civilizations at least 7000 years ago as a solution to permanently solve the problems of poor tropical soil fertility. Large deposits of this black earth are still found today with depths of up to 2 meters. The first deposits where discovered in 1870, but it has only been in the last 10 years that significant interest and study have been initiated.

This soil is attributed to the complex civilizations that reportedly once thrived in the Amazon. Prior to the onset of diseases brought on by the western settlers, this expansive web of communities is estimated to have totaled over 100 million people. It is speculated that Terra Preta soils are what sustained them in harmony with their ecosystems.

With increasing tropical populations, rising malnutrition and increased deforestation due largely to swidden (slash-and-burn) agriculture, urbanization and other pressures, the rediscovery of Terra Preta techniques will be crucial to creating human sustenance in harmony with our earthly organism. Beyond that, many are looking to Terra Preta for its potential in sequestering carbon and helping reverse associated anthropocentric climate change related to increasing levels of atmospheric carbon.

We have yet to figure out exactly how ancient civilizations produced Terra Preta, but what we do know is that the soils contain high amounts of char-wood (also referred to as bio-char). Char-wood is basically a form of charcoal produced by burning wood or agricultural residues in an environment very low in oxygen. This process is called pyrolysis.

Char-wood, like charcoal, is a carbon source that has extreme stability in soil. In addition, it is extremely porous and therefore offers a large surface area for the formation of stable and long lasting organo-mineral complexes – the chemical bonding of soil organic matter with soil minerals. Terra Preta soils have been found to contain organic matter content that are 50x greater and contain 3x more Phosphorus and Nitrogen as neighboring forest soils. In addition, even the heavy tropical rains do not leach nutrients out of this soil.

Could this mean that the solution to the fertility problems of the tropical regions of the world is as simple as adding char-wood to our mulch and compost? Many scientists believe that its benefits are even far greater with the potential to halt and reverse anthropocentric climate change.

Success [in the replication of Terra Preta techniques] would reduce, or eliminate, the hunger being experienced by about 0.8 billion of the world’s population, most of whom are part of the 75% of the world’s population that live in tropical countries. Converting tropical cropland soils to terra preta would also reduce, or eliminate, the need for shifting cultivators – swidden agriculturists [commonly referred to as slash-and-burn farmers] – to abandon their cropland every three or so years and clear new patches of tropical forest. Success would also create an additional carbon sink large enough to hold all current and future anthropogenic greenhouse gas emissions out to around the year 2100. Photosynthesis would draw atmospheric greenhouse gasses into tropical vegetation. Tropical farmers would incorporate such vegetation plus "char-wood" into their cropland soils to create terra preta where the half-life of such organic matter and "char-wood" would be increased to over 5000 years as compared to the normal half-life of 3-30 years. The result would be a large carbon sink. Farmers would be rewarded for their efforts by a doubling or tripling of their soil’s fertility. The net cost of the sink to mankind would be virtually zero. This sink could restore global mean surface temperature to that prior to start of melting of the Greenland ice cap and prior to the shrinking of the bulk of the world’s glaciers." – www.home.windstream.net/bsundquist1/tpgw.html – read full article for a detailed breakdown on how this is possible

There is already is extensive production of wood-char in the region of the Amazon where Planet People Passion’s site is located, but the production is not in any way contributing to the health of the soil. Instead, in this area of the Amazon, most people are cooking with this bio-char. In fact in the city of Iquitos (60km away), nearly 400-500k people cook with his material.

The wood-char is produced in the rural areas, and then shipped to the city where it is burned for cooking. So, wood-char is being created as a commodity in itself without investing it back into the land. Largely because the high profit farmers make on wood-char exports relative to local agriculture profits (and frustrations), many of the farmers have transformed from "slash-and-burn" to "slash-and-char" but this char is not being put into the soil – it is being sold in the cities and exported. Therefore the forest is being cut and left bare and untended, with the small amount of soil previously maintained by the rainforest being washed away and eroded almost instantly.

We have always felt that there was a missing link in the production of wood-char. The missing link is the soil! Before, exploring the concepts of Terra Preta, we wanted nothing to do with it – but as Permaculture teaches us, the problem is the solution. Perhaps the system itself is backwards, could an effective process be to create wood-char in the process of cooking rather than use wood-char for cooking? Then this wood-char could be invested in the land for long-term profits rather than sold for short-term profits. Furthermore, how can we create systems of land management where wood-char production is integrated in a food-forest, where the materials required are sustainably harvest and also in a proportion and process that reduces atmospheric carbon rather than adding to it (since the production of wood char does release a certain amount of CO2 in the atmosphere when created).

Planet People Passion is exploring these questions and more in the development of their education site in Peru and in the Permaculture Design Certificate Course June 22 – July 6th lead by Andrew Jones. This course will be an exciting opportunity to be involved in the initial design planning of the site, which will be transforming degraded jungle land into an abundant food forest. In addition there will be a concentration on medicinal plants and the shamanic culture of the region.