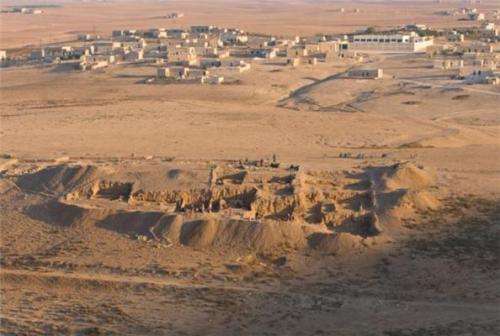 The mitochondrial DNA of the first Near Eastern farmers has been sequenced for the first time. In the research, published in the journal PLOS Genetics, experts analysed samples from three sites located in the birthplace of Neolithic agricultural practices: the Middle Euphrates basin and the oasis of Damascus, located in today's Syria and date at about 8,000 BC.

The paper is signed by Daniel Turbón and Alejandro Pérez Pérez, from the Department of Animal Biology of the University of Barcelona (UB); Eva Fernández, from Liverpool John Moores University; Cristina Gamba, Eduardo Arroyo Pardo and Pedro Cuesta, from Complutense University of Madrid; Eva Prats, from the Spanish National Research Council, and Josep Anfruns and Miquel Molist, from the Universitat Autònoma de Barcelona (UAB). The study is focused on the analysis of mitochondrial DNA —a type of non-Mendelian maternally inherited DNA— from the first Neolithic farmers, by means of samples obtained by the UAB research group which were first processed by the UB research group.

The Neolithic: a deep revolution in human societies

Agricultural and husbandry practices originated around 12,000 years ago in a region of the Near East known as the Fertile Crescent. This phenomenon, known as "Neolithic", meant a profound social, cultural and economic transformation of human populations (agricultural production, sedentary farming lifestyle, origin of the first cities and modern societies, etc.).

Eva Fernández, first author of the article who got her PhD from UB, explains that "the Neolithic Revolution rapidly expanded from these territories into Europe, where the hunter-gatherer subsistence economy —prevailing till then— was replaced by an agropastoral producing system". To know the nature of the diffusion of the Neolithic —in other words, to know if it was a population migration process or a cultural adoption— has been widely debated for the last fifty years. Different research fields, for instance archaeology, physical anthropology, linguistics and, more recently, human paleogenetics, have made contributions to the discussion.

The unknown genetics of first Near Eastern farmers

The genetic composition of first Neolithic populations was one of the mysteries of science till today, although some advances in European Neolithic populations' genetics were made during the last decade. Professor Daniel Turbón points out that the results revealed by the study published in PLOS Genetics "are the first ones regarding first Near Eastern farmers; in other words, the genetic stock of original Neolithic". However, it is important to remember that other data have been published about European first farmers, to be exact in Catalonia (by Cristina Gamba et al., 2012), the Basque Country (by Hervella et al.) and Germany (by Wolfgang Haak et al., 2010, and Brandt et al., 2013).

"Conclusions of previous studies —explains Turbón— are based on the comparison with current Near East populations, as first agricultural societies' genetics have remained unknown until now".

From the Near East to Europe

The study published in PLOS Genetics provides a new framework to interpret the results of other studies about European Neolithic populations, stress the authors. According to conclusions, genetic affinities have been observed between the mitochondrial DNA of first Neolithic populations and the DNA of first Catalan and German farmers. This suggests that probably Neolithic expansion took place through pioneer migrations of small groups of population. Moreover, the two main migration routes ―Mediterranean and European― might have been genetically linked.

"The most significant conclusion —highlights Eva Fernández— is that the degree of genetic similarity between the populations of the Fertile Crescent and the ones of Cyprus an Crete supports the hypothesis that Neolithic spread in Europe took place through pioneer seafaring colonization, not through a land-mediated expansion through Anatolia, as it was thought until now".

How did the Neolithic Revolution spread?

Other scientific studies had already provided signs of an alternative scenario of Neolithic spread in Europe different from the one through Anatolia. According to Turbón, "recent archaeological finds have proved that the Neolithic arrived to Cyprus around 10,600 years ago, some years after the first documentation of agricultural practices in the Near East". Architecture and burial models found in Cyprus' sites are similar to the ones found in the Middle Euphrates basin, "that indicates a direct colonisation of these territories", highlights the author. "Besides, spatial interpolation of radiocarbon dates from different Neolithic sites in the Near East and Europe also suggests a first seafaring expansion through Cyprus", he concludes.

In order to support these conclusions, the scientific team aims at analysing a greater number of human Neolithic samples from other regions of the Fertile Crescent, and at increasing the number of genetic markers analysed in the samples.