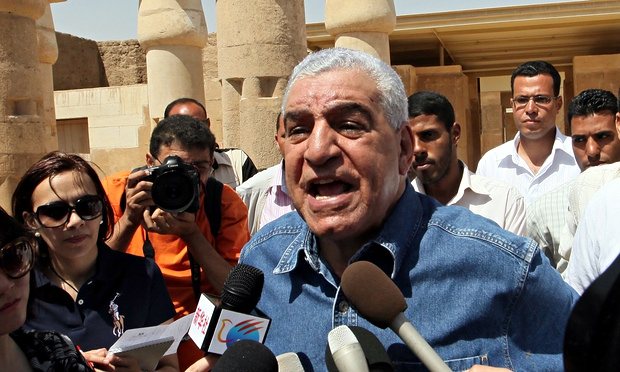 The world’s most famous contemporary Egyptologist, Zahi Hawass, has been summoned for questioning over claims that he helped three German hobbyists steal rock samples from inside Egypt’s largest pyramid. Hawass denies the charges, saying “there is nothing against me”.

In April 2013, the three Germans – two amateur archaeologists and a film-making accomplice – crept inside the inner sanctum of the Great Pyramid at Giza, the last the seven wonders of the ancient world to remain relatively intact.

The trio, conspiracy theorists Dominique Görlitz, Stefan Erdmann and Peter Hoefer, wanted to show that the pyramid was not the final resting place of the pharaoh Khufu, as has long been accepted, but was in fact a relic of an even older empire.

n an attempt to prove this, they scraped off part of the pyramid’s cartouche – the insignia that denotes for whom the pyramid was built – and took it back to Germany for testing. Following an international outcry, the samples were later returned, and the men put on trial in absentia – along with five Egyptian officials accused of helping them to illegally access the pyramid.

All eight were convicted on Tuesday, after a trial in which the five officials claimed that it was in fact Hawass, a controversial former antiquities minister, who had facilitated the theft of the samples, during his involvement in a documentary about the cartouche in 2010.

Following the convictions on Tuesday, the judge summoned Hawass for questioning about his involvement. Hawass denies playing a part, saying that he left government in mid-2011, two years before the crime took place. He admits that as antiquities minister he gave the go-ahead to the 2010 documentary, but says that during filming, “no one touched the cartouches and no one even put their hands near it”.

In an angry phonecall, Hawass added: “I was not in charge in 2013. This [theft] happened in April 2013 … There is nothing against me. I just have to go to the district attorney to prove that what happened in 2010 was according to the law.”

Regardless of the outcome of his questioning, this is the latest setback in a once-stellar career that floundered after Hawass was forced out of the antiquities ministry following Egypt’s 2011 uprising.

In the 2000s, the flamboyant Hawass became known as Egypt’s Indiana Jones, starring in several Egyptology documentaries, as well as his own reality series. In 2006, Time magazine named him one of the 100 most influential people in the world, and he later put his name to a line of khaki trousers.

But when dictator Hosni Mubarak was ousted, Hawass was tainted by association, and despite hanging on to his position for a few months, he later left under a cloud of never-proven corruption allegations.

In an interview with the Guardian last year, Hawass hinted that he would be interested in a comeback, emphasising that he was the only man for the job.

“It’s a gift from God,” said Hawass of his leadership skills.

“When I talk people listen to me, when [others] talk people sleep,” he later added. “I don’t see why people criticise me about this. I made Egypt in the hearts of everyone everywhere.

“Before, only foreigners used to do that. I went to England, and I got in a lift, and a lady fainted when she saw me. She could not believe that I was in her hotel. What can I do?”