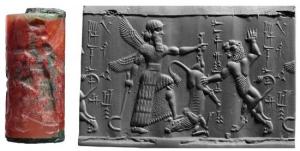 The Morgan's seals collection is one of the most distinguished in the United States and among the best known in the world. Generally only an inch in height, engraved seals are among the smallest objects ever produced by sculptors. They were carved in great detail with simple tools on semiprecious stones. These engraved objects provide a continuous artistic and chronological sequence of more than three thousand years. The seals collection covers all the significant styles of Mesopotamian engraving from the end of the fifth millennium B.C. to the fourth century B.C. as well as most of the styles of other countries of the ancient Near East. Areas of particular strength include seals of the second millennium B.C. made outside southern Mesopotamia (Cappadocia, Syria, and Mitannia) as well as Old Babylonian and Neo-Assyrian seals. The Middle Assyrian seals are among the finest in any collection.

Pierpont Morgan collected nearly three thousand cuneiform tablets, the bulk of which are now in the Yale

Babylonian Collection, which he founded. The Morgan's collection also includes cuneiform tablets and a few outstanding art objects from the ancient Near East.

We acknowledge with grateful thanks Jeannette and Jonathan P. Rosen's generous underwriting support for the activities of the Department of Ancient Near Eastern Seals and Tablets.