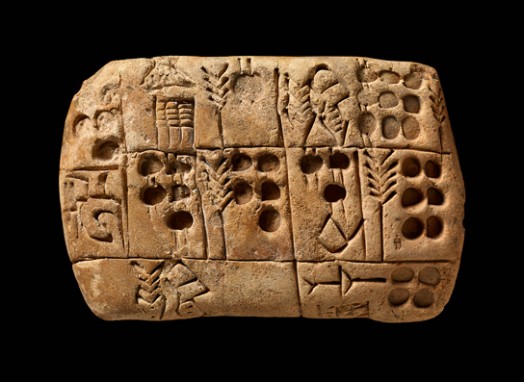 The earliest form of writing

The earliest examples of writing known anywhere in the world are from Sumer and date to around 3200 BC. The first Sumern writing used simplified pictures called pictograms which represented objects. Gradually, these pictograms were made more abstract and developed into a form of writing known as cuneiform which used wedge-shapes to form symbols. In later cuneiform there were more than 600 symbols which could be used to write very efficiently. Cuneiform script spread from Sumer and eventually was used to write around fifteen different languages in ancient Iraq and other parts of the Middle East down to the 1st century AD.

What the tablet says

Most writing from ancient Mesopotamia is on clay tablets. Damp clay was formed into a flat tablet. The writer used a stylus made from a stick or reed to impress the symbols in the clay, then left the tablet in the air to harden. This tablet is marked with symbols showing quantities of barley rations for workers. The symbol for barley appears six times front and back, represented by a single stalk with ears at the top. There are four distinct numeral signs: large and small circles with and without two extra strokes. Other signs record the official responsible for the transaction. The simpler back of the tablet is the sum of the calculations on the front.

The uses of early writing

As the activities of the early Mesopotamian city-states became increasingly complex, organisational structures were put in place to administer and control the economy, and methods of keeping records were developed based on clay tokens and simple mark-making. We can tell from the written tablets what needed to be recorded: quantities of crops such as barley and emmer, foodstuffs such as beer and bread, the numbers of sheep and cattle, the numbers of labourers in the workforce, the size of fields and the amount of seed required to sow them. Once writing had been invented, it quickly became the preferred system of record-keeping, replacing the earlier methods.

Record-keeping was a complex business. It required a high level of accuracy, mathematical competence, and a standardised set of measurements appropriate to the different commodities being recorded. These in turn required a body of professional scribes and an organised, regulated system of training them. The scribes formed, in effect, a civil service and we know from later tablets that they worked in different aspects of the administration such as the palace, the weaving mills or the temples.

While record-keeping and administration were the reason for the development of writing, it was soon used for stories, beliefs, memories and other creative outputs. Later cuneiform tablets provide examples of scientific observation, religious ritual, treaties, letters, poetry and insights into how life worked in the Mesopotamian world. Probably the most famous cuneiform tablet relates an episode in the story of the hero Gilgamesh, in which a man survives a great flood sent by the gods by building a boat. Another tablet, deciphered only recently, gives instructions for building the boat.