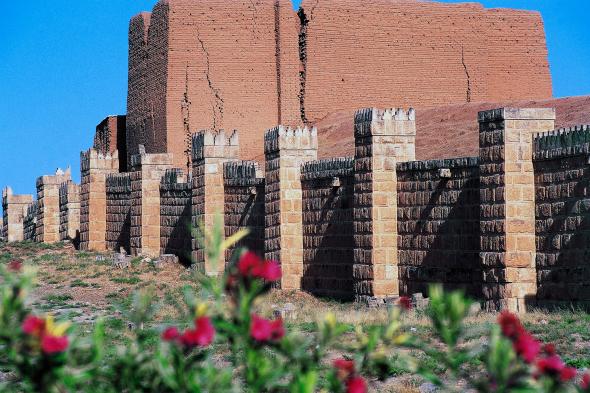 National Geographic has received exclusive photographs that appear to confirm the destruction of the Mashki and Adad Gates by the Islamic State (ISIS) at the ancient site of Nineveh in Iraq.

Unconfirmed reports of the destruction of Nineveh's iconic gates began to emerge late last week but have been subsequently confirmed by Michael Danti, professor of archaeology at Boston University and co-director of the Cultural Heritage Initiative (CHI) at the American Schools of Oriental Research. The Initiative works with the U.S. Department of State to document destruction of cultural and religious sites in Iraq and Syria.

The destruction of the gates and a large portion of the fortification wall is based on the images obtained by the CHI and corroborated by "trusted sources" in Mosul, the ISIS-occupied city that surrounds Nineveh, as well as by recent satellite imagery.

Nineveh was already an important urban center more than 4,000 years ago, and at its height around 700 B.C. was a capital of the Neo-Assyrian empire and the largest city in the world.

The city featured numerous temples and the sprawling 80-room palace of King Sennacherib, all surrounded by a wall 7.5 miles (12 km) long punctuated by 15 gates.

The Mashki Gate, known as the "Gate of the Watering Places," may have been used to lead livestock to the nearby Tigris River. The Adad Gate takes its name from the Mesopotamiangod of weather and storms.

Sennacherib's reign was marked by his siege of Jerusalem in 701 B.C. and is recorded in Assyrian sources and in the Bible, which also describes the prophet Jonah's visit to Nineveh. The city was sacked in 612 B.C. by a Babylonian alliance.

While the gates of Nineveh were rebuilt in the 20th century, they remain prized symbols of the ancient heritage of the residents of modern Mosul.

The Arab Muslim, Arab Christian and modern Assyrian population of the area all trace their ancestry back to the ancient Assyrians. "It's part of their modern identity," says Danti.

A Scorched Earth Policy Ahead of an Advancing Army

As the Iraqi army makes plans to liberate Mosul from the control of the Islamic State, there are unconfirmed reports that other gates and walls in Nineveh are also being plowed under.

"It's reasonable to assume that [ISIS] is destroying other gates [in Nineveh], but we need to get more information before we can make those assertions," Danti adds.

"[ISIS] is essentially sending a signal to the government of Iraq that if they continue with their offensive on Mosul they can expect a scorched earth policy from Islamic State, in both Mosul and the Iraq theater but also in Raqqa in the Syrian theatre," he says.

Deliberate destruction of monuments by ISIS has been recorded since the Islamic militants first seized Mosul in June 2014. A mosque dedicated to the prophet Jonah inside the walls of Nineveh was destroyed by ISIS in July 2014.

Sculptures from the site were damaged during ISIS' rampage through the Mosul museum in February 2015. The militants have also destroyed the city's main libraries, which contained centuries-old manuscripts.

According to Danti, the Islamic State's scorched earth policy is psychological warfare intended to give the appearance that they are in control and to make onlookers feel powerless.

Misinformation and unsubstantiated rumors on social media add to the anxiety the militants want to provoke. "I think we should expose what they're doing," says Danti, "and not let it be a mystery."