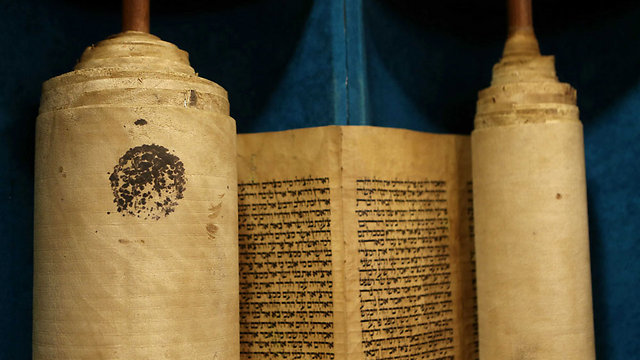 Editors Note MP: While I do not think the primary reason for America’s War in Iraq was primarily for Iraq’s archeological artifacts. As some who have latched on to this theory have concluded. Never the less I consider it a extra incentive for the War with Iraq in order to obtain Iraq’s archeological treasure. Being considered the spoils of War. Especially if artifacts date back to the Jewish Babylonian Era.

A rare 200-year-old Torah scroll handwritten with pomegranate juice concentrate on deerskin, which sat for decades in the Iraqi intelligence’s cellars, has made its way to the Foreign Ministry in Jerusalem after spending a few years in the Israeli Embassy building in Jordan.

Following a complicated restoration process by a Torah scribe in Jerusalem, the scroll is being placed these days in the Foreign Ministry’s synagogue.

The Torah scroll was kept for years in a storeroom in the Israeli Embassy in Amman. It was likely smuggled there along with other ancient Torah scrolls found by American soldiers in the Iraqi intelligence’s warehouses, which were seized by US forces during the second Gulf war.

From the embassy in Jordan, the holy books were sent to Israel for restoration, apart from one disqualified Torah scroll which remained in the embassy for years.

(Amnon Israel with the Torah scroll he insisted on restoring)

In September 2011, after the Israeli Embassy in Cairo was evacuated, the Foreign Ministry instructed its representatives in Jordan to remove all items, including the unessential ones, from the embassy in Amman for fear that rioters would attempt o raid the building.

In early 2012, the forgotten Torah scroll was transferred to the Foreign Ministry in Jerusalem, where it was kept in a storeroom until a new caretaker arrived about a year ago.

The new caretaker, Amnon Israel, approached a Torah scribe in Jerusalem and asked if he would be able to restore the ancient scroll. The scribe, Akiva Garber, who specializes in the restoration of holy books, examined the Torah scroll and found and Iraqi intelligence stamp in it.

A microscopic sample of the scroll’s ink revealed that it was made out of pomegranate juice concentrate.

The examination also revealed that the scroll was about 150-200 years old and was likely written in the Kurdish region in northern Iraq.

According to estimates, the scroll was confiscated by the Iraqi intelligence service (the Mukhabarat) after the major immigration waves to Israel.

The scroll was disqualified because the writing had cracks in it, the pages were torn and it had old patches and mold, but Garber’s recommendation was that it could be restored.

The Foreign Ministry decided to invest in the restoration, and now that the process has been completed, the ancient Torah scroll has been placed in the synagogue. An official induction ceremony is expected to take place at the synagogue soon in the presence of Foreign Minister Avigdor Lieberman.

The Foreign Ministry did not settle for that, and decided that such a Torah scroll deserves a special case as well. With the help of Material Resources Manager Tzvia Shimon, a 100-year-old case of a Torah scroll smuggled to Israel from Aleppo, Syria, was brought in from the Prime Minister’s Office. The rare case, which includes a dedication to a deceased person, has also been restored.

“It’s a beautiful scroll,” says Amnon Israel. “It includes two writings: The first part, the Book of Genesis, has seven deerskin sheets in one type of writing and the rest in a second type of writing. It is written on deerskin rather than on a regular parchment, and that’s what makes it so unique.

“We haven’t had a Torah scroll at the Foreign Ministry until now. We hold bar and bat mitzvah ceremonies for the employees’ children at the ministry’s synagogue, and we decided that we should definitely bring in a Torah scroll with such a history.”