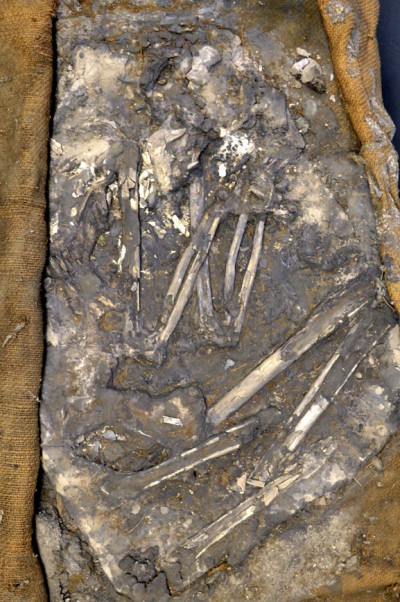 The documentation that led to the rediscovery of an ancient skeleton from Ur in the Penn Museum’s storerooms last year showed that two skeletons had been received in March of 1931. This month we have located the second.

Like the first skeleton, this one was originally excavated in a deep pit intended to investigate the earliest levels of the ancient city. The first came from Pit F, nearly 50 feet below the surface of the mound. The second came from Pit Y, around 45 feet down. Overall documentation on the second skeleton is not nearly as complete as the first, however.

The minimal documentation recorded on receipt showed only that one skeleton was ‘stretched’ and the other was ‘flexed.’ The Ubaid period skeleton 31-17-404 is indeed extended, lying on its back with hands at its pelvis. The second skeleton, 31-17-403, is lying on its side with its knees bent and its hands near its mouth. Woolley took several photos of the first skeleton and the process of waxing it, but he did not report preserving a second skeleton. He did, however, take a field photograph of what he called the best preserved example of the flexed burial type. This was the very skeleton he preserved, which is shown by overlaying the field photo on a modern image of our skeleton for an exact match.

The published version of the field photo is labeled JNG/361, which stands for Jemdet Nasr Grave number 361. Jemdet Nasr is the name of a site that lends its name to a particular time period, but there is much debate today about its temporal extent. In fact, the majority of Woolley’s late JN graves are most likely Early Dynastic I period and the earlier are most likely Uruk period.

The original field photo is labeled PG1834. This number comes at the tail end of the sequence of assigned PG numbers (which end at 1850) and in fact Woolley renumbered many of the series from PG1818-1846 into JNGs because he had gone deeper than the main burials in the Royal Cemetery or believed the burials to be earlier.

Sorting out these re-numberings is a big challenge but one that’s vital to understanding the sequence of burials and the progression of the dig. As Woolley went deeper in the Royal Cemetery area (PG), he decided to uncover the earliest levels of the city and thus he continued to dig down from the base of some of the PG graves. These areas then became test pits and he made a good number of them over the latter years from 1929-1933. Pits A through E were located in the Royal Cemetery area, but Pit F was located north of there (and it was the findspot of the extended Ubaid period skeleton).

Woolley closed excavations in Pit F in January of 1930 and by that time he had already decided to dig even deeper in the Royal Cemetery in order to compare to the results of Pit F. To do this, he jumped ahead in his lettering scheme and created pits Y and Z in an area of many of the PG1800 graves.

In Pit Y he found a few graves of the flexed type, including JNG/361. He used the same technique of pouring wax on the body that he had with PFG/Z (Pit F, Grave Z, the Ubaid period skeleton 31-17-404). Our biggest problem, however, comes from conflicting data he recorded. In his chart of burials he tells us that the body in JNG/361 was lying on its right side. The skeleton we have, which matches the position and condition of the field photo skeleton, is lying on its left side. Either Woolley mistakenly wrote right when he meant left, or he mis-wrote the number of the JNG grave. For example, JNG/351 is said to be lying on its left side. Whatever happened, there is clearly a mistake somewhere. Verifying the exact mistake is almost impossible. It seems most likely that this really is JNG/361 since the photo is labeled as such. Woolley probably noted that the body was facing to the right as we look at it and wrote it down as on its right side.

Associated with the burial of JNG/361 were four pottery types. Two of them are not overly diagnostic, but the other two are rather clearly late Uruk types, which gives us a date around 3300BCE. It is a very rough date that could be off by as much as 200 years either side, but it shows us that this body is at least 1000 years later than the Ubaid one, which we have roughly dated to 4500BCE.

Burial practices are typically quite tenacious, unchanging for long periods of time because they are usually centered in deeply held beliefs. At some point in the 1000 year interval here, the method of burial as reflected in position of the body changed. In fact, most burials at Ur are flexed and on their side, like this one, but the very earliest burials of the Ubaid period were not. In the old days of scholarship, such a change would typically be used to suggest an influx of new people, an overthrow of a current population by some other. This is not necessarily the case, however. There may have been some outside influence, but that does not mean an invasion or overthrow.

In fact, both the Ubaid and Uruk cultures were rather far-reaching. Characteristics of the Ubaid culture are found throughout much of Mesopotamia and Uruk even more so. The Uruk in general is thought of as the proto-state period, when state government was arising and managing increasing numbers of people. This is the time when Ur and many other places were becoming what we today would consider true cities. Yet both Ubaid and Uruk peoples relied on far-reaching trade networks to bring in much needed materials. Along with these almost certainly came new ideas.

The shift in Ur between the times of these two burials is a fascinating one and we hope that the remains of the two individuals can give us more insight into that change. The Uruk period skeleton in particular is the focus of a current class in the Living World in Archaeological Science, where Penn undergrads and grads are working with Penn scientists to reveal more on its physiological condition and cultural significance. Thus far, x-rays have shown a good deal but it remains difficult even to determine the gender due to the positioning of the body and the wax and soil covering. The students are discussing these difficulties and trying to determine ways to investigate the body in spite of them. They are also learning about just what kind of information we might be able to obtain and the various scientific techniques that could result in much more. Read more about it in this article at the Philadelphia Inquirer.