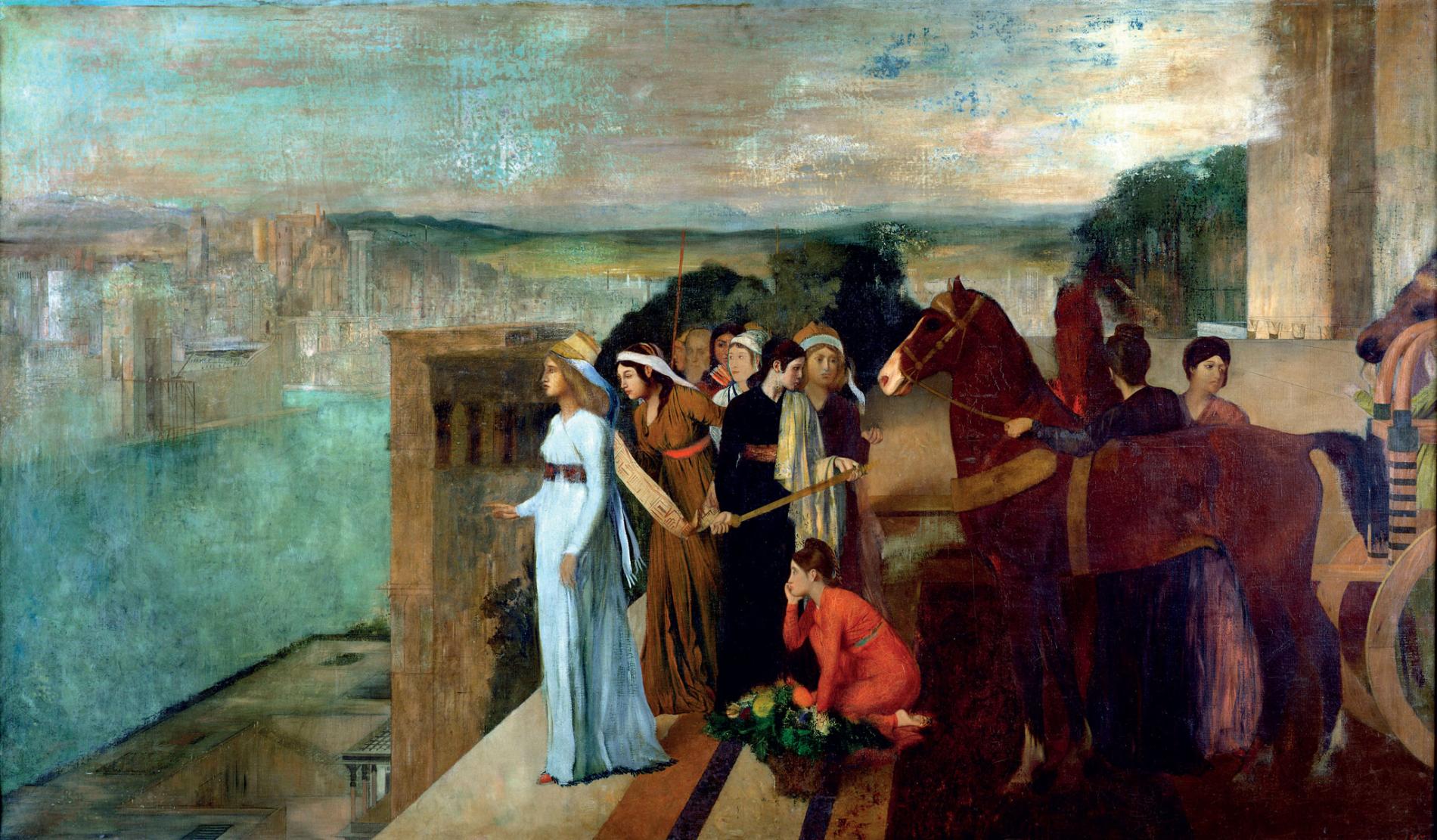 Female rulers in ancient Mesopotamia were rare. But those who did rule made their mark on history. In the Neo-Assyrian regime of the ninth century B.C., one woman commanded an entire empire stretching from Asia Minor to what is today western Iran. She was Sammu-ramat, thought to mean “high heaven.” Her five-year rule, while brief, appears to have inspired long-lasting respect among her subjects and the world.

Centuries after her reign, Greek writers, and historians focused on Sammu-ramat and her achievements. They hellenized her name to Semiramis. From here, the Assyrian queen passed from the world of facts into the realm of legend. Some cast her as a beautiful femme fatale in a tragic love story. Classical authors attributed great accomplishments to Semiramis: commander of armies, and builder of the walls of Babylon and monuments throughout her empire.

Her allure did not diminish with time. She later inspired the Italian medieval poet Dante, who placed her in his Inferno where she is punished for her “sensual vices.” The French Enlightenment writer Voltaire wrote a tragedy about her, which was later made into Rossini’s 1823 opera, Semiramide.

The true story of the flesh-and-blood Sammu-ramat remains elusive. The question lingers: What did she achieve 2,800 years ago that so fascinated the world and allowed romantic legends to sprout around her legacy?

Archaeologists have found four principal artifacts that offer at least some evidence to piece together her biography. In the ancient city of Nimrud (in modern-day Iraq), two statues dedicated to Nabu, the Babylonian god of knowledge and writing, mention her name. There are also two stelae, one from Kizkapanli, a town in present-day Turkey, and the other from Assur in Iraq, that mention her. Taken together, the four inscriptions establish at least the bare bones of her story: The queen definitely lived in the Assyrian Empire between the ninth and eighth centuries B.C., was married to King Shamshi-Adad V, who reigned from 823 to 811 B.C., and was the mother of King Adad-nirari III.

With these key facts in place, historians have formed a clearer idea of her significance, and know that she entered Assyrian history at a critical moment for the empire. Her husband was the grandson of Assyria’s great ruler, Ashurnasirpal II, a flamboyant monarch who built a magnificent palace at Nimrud in the early ninth century B.C. This event is commemorated by the Banquet Stela, which recorded thousands of guests and a celebration that lasted for 10 days. Ashurnasirpal II stabilized the empire, putting down revolts with a level of cruelty that he made no attempt to hide. One inscription tells of the vengeance meted to rebels at one particular city of his realm:

I had a column built at the city gate and I flayed all the leaders who had rebelled and I covered the column with their skins. Some, I impaled upon the column on stakes and others I bound to stakes around it.

The empire that Ashurnasirpal II’s grandson inherited may have been stable and wealthy, but it did not stay that way for long. King -Shamshi-Adad V appears to have spent a great deal of -resources in defeating his rebellious elder brother, who wanted to take the throne. By the time Shamshi-Adad died in 811 B.C., the empire was financially and politically weakened. His young son, Adad-nirari III, was too young to rule. It would be left to Queen Sammu-ramat to restore stability to Assyria through her regency.

FROM MEMORY TO MYTH

Although the four main sources do not spell out whether she claimed the regency, the inscriptions make it clear that Sammu-ramat exercised a degree of political power—unlike that of any other woman in the history of Mesopotamia. The stela from the city of Kizkapanli, for -example, mentions that the queen accompanied her son when he crossed the Euphrates River to fight against the king of the Assyrian city of Arpad. Her presence was unusual for the time, and the fact that the stela bothers to mention her participation gives Sammu-ramat’s actions a strong degree of honor and respect.

By the time Adad-nirari III came of age (he would reign until 783 B.C.), Sammu-ramat had impressed her subjects with her strength and steadiness, as the stela at Assur shows. Its inscription places her almost on a par with male rulers and is dedicated to “Sammu-ramat, Queen of Shamshi-Adad, King of the Universe, King of Assyria; Mother of Adad-nirari, King of the Universe, King of Assyria.”

After Sammu-ramat’s death, her name seems to have echoed down through the generations. In a society with a rich oral tradition, a certain amount of embellishment crept into her story, which seemed to grow larger from one telling to the next. In the fifth century B.C. the great classical historian Herodotus perpetuated the memory of this queen using the Greek form of her name: Semiramis. It is by this name that she is best known today.

It was Diodorus Siculus, a Greek scholar writing in the Roman world of Julius Caesar and Augustus, who solidified much of Semiramis’s legend. His colossal, semi-historical work Bibliotheke surveys events from creation myths to his own day and age. In it he offers a detailed, if somewhat fantastic, narrative of the Assyrian queen. Some of Diodorus Siculus’s work is based on a previous, now lost text by Ctesias of Cnidus, a Greek doctor who had served the Persian court in the fourth century B.C

According to Diodorus, Semiramis was born in Ashkelon (in present-day Israel), the fruit of a pairing between the Syrian goddess Derceto  (a local version of the Phoenician goddess Astarte and the Babylonian Ishtar) and a young Syrian man. Ashamed of the relationship, the goddess abandoned the baby girl, who at first was cared for by doves. Later, the chief shepherd of the king of Assyria ended up adopting the child and giving her the name Semiramis.

Semiramis grew into a young woman of extraordinary beauty. The royal governor of the province of Syria, named Onnes, was struck by her beauty when he met her while inspecting the royal flocks. Onnes obtained her adoptive father’s consent to marry her. After the wedding, he took Semiramis with him to Nineveh. Later, Onnes was sent to besiege the city of Bactra in central Asia. Missing his wife, he asked that she come to join him there. Not only did Semiramis travel to this remote spot to be with her husband, she also came up with a winning strategy that made the besieged city surrender.

When he learned of this amazing feat, the Assyrian king wanted to meet the heroine and had her brought before him. According to Diodorus Siculus, the king’s name was Ninus (Nineveh was supposedly named after him). Ninus fell in love with Semiramis at first sight and ordered Onnes to trade his wife for one of Ninus’s daughters. Onnes boldly refused but was subjected to so many threats by King Ninus that he finally committed suicide. The widowed Semiramis married Ninus and became the queen of Assyria.

Within a few years of the marriage, King Ninus died. At this point, Diodorus Siculus’s version of the queen’s life converges with her historical one: Semiramis took personal charge of the government, acting as regent to her son, who was still a child.

According to the Greek historians, the new queen’s ambitious building projects earned admiration for her rule. Setting out to emulate the agenda of her late husband, she is said to have ordered a new city to be built on the banks of the Euphrates—-Babylon. Diodorus Siculus even suggests that Semiramis erected not only the city but also its other features: the royal palace, the temple of Marduk, and the city walls. Other Greco-Roman authors, including Strabo, claimed that Semiramis had been behind the fabulous hanging gardens of Babylon, one of the seven wonders of the ancient world. The historical evidence in no way supports their claims.